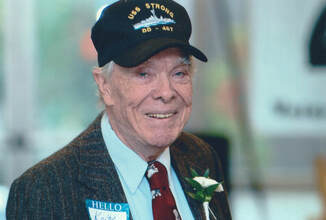 Lt.(jg) USNR ret. Keith Sherlie at 92 years
After the loss of the STRONG
​The USS STRONG departed Tulagi as part of task group 36.1 late in the afternoon of July 4th and was torpedoed at Kula Gulf early the next morning. After the sinking of the STRONG shortly after midnight on the 5th, Captain Joseph Wellings, Ensign Keith Sherlie, Fireman 2nd class Melvin DuBard, Signalman 1st class Maurice Rodriguez and Seaman Eddie Rock found themselves thrown together on a floater net. They were picked up from the just before dawn that morning by the USS GWIN. They were treated for their injuries aboard the GWIN and transported to Honiara Guadalcanal.

On arrival at Honiara the officers were separated from the sailors and transferred by ambulance to mobile hospital base 5. Ensign Sherlie awoke in the morning in the hospital officers ward together with Capitan Wellings. The medical staff gave Sherlie the ok to walk about, but to take it easy. Capitan Wellings told Ensign Sherlie to report to Admiral Halsey's office on his behalf and advise Admiral Halsey that the STRONG survivors were ready to be transported back in group to the states as the "STRONG'S" ships company for survivors leave.

On arriving at Halsey's office Sherlie found that General Harmon had replaced Admiral Halsey. General Harmon extended every courtesy, and said every assistance would be provided to Captain Wellings and his crew. After several days in the hospital Sherlie was informed that he was to be taken to Noumea New Caladonia by evacuation transport ship USS RIXEY to await transfer to the states.

At the Naval Base in Noumea, Sherlie delivered to the payroll office the STRONG's pay list which he had recovered from the ships office and placed in a condom in his shirt pocket for safekeeping before stepping over the side into the waters of Kula Gulf. This allowed the crew to be paid immediately avoiding the long delay of waiting for the pay records to be reconstructed. Reunited with many of the surviving STRONG shipmates in Noumea and flush with cash, R & R was enjoyed by the crew until transport to the states was available.

The trip back to the states took a month. Reporting to the Naval district office in San Francisco Ensign Sherlie was given survivors leave at the end of which he would report to the USS OAK HILL (LSD 7) an Ashland class landing ship dock under construction at the Moore Dry Dock Co. Oakland California. He spent several weeks happily reunited with family in Snohomish WA. before returning to Oakland to take up his new post as supply officer and paymaster.

Reporting aboard the OAK HILL to Commander Carl Peterson, he was told that as they were in the final stages of fitting before commissioning the ship and as he had not experienced the South Pacific, was there anything in particular that the ship should be fitted with. Based on his experience as supply officer to the STRONG he said they really needed a second ice cream machine. Why is a second machine necessary? questioned Peterson. "Cumshaw" replied Sherlie, ice cream was its currency, and related his first evening aboard the STRONG as supply officer at Seagond channel Espiritu Santo where XO Fred Purdy tasked him to get the ship a supply of toilet paper as they had none. He and several seamen in a whaleboat tracked down a warehouse up a narrow river where he by the practice of "cumshaw" he was able to fill the whaleboat with toilet paper for the ship.

A request was put in to the Navy and the Bureau of Ships for a second ice cream machine which was turned down. But, they were given permission to procure one at their own expense. A collection was taken up between the officers present at the time and the machine was purchased and installed.

Commissioning of the OAK HILL was January 5th 1944. 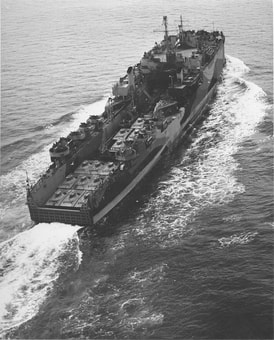 Two LCTs aboard are loaded stern to stern in Oak Hill's well deck along with numerous LVTs.
Return to the South Pacific

The OAK HILL was designed to serve as a cargo and transport type amphibious ship and as a floating dry dock. She had a crew of 330 men and 18 officers. They began service by ferrying cargo between the west coast and Hawaii. In early May she engaged in rehearsals for operation "Forager" the thrust into the Marianas and at the end of the month sailed west in T.G. 52.16. With tank-bearing LCMs and troops of the 2rd Marine Division on board she arrived in transport area off Saipan early on 15 June. Once in position he engineering officer on the wing wall would order the 45-foot steel stern gate open a crack, and the first sea spills in around its lower edges as the ship settles in the sea. Slowly, the well fills like a big bathtub and 7000 tons of salt water will flood the docking well.  Her boats once again floated were soon away and headed for the beachhead while the LSD took up repair duties working on LCMs LCVPs and LCTs.

It was realized from the beginning that LSD's would be very versatile and handy ships to have around - not just during infrequent major amphibious landings but for general transport and day to day odd jobs that arise particularly including small craft maintenance. In fact, this is exactly what maintenance became far better known for, their ability to take smaller craft aboard for on the spot dry dock repairs. Each LSD was equipped to change screws, shafts and other parts of smaller craft by virtue of a fully equipped machine shop as well as a complete wood shop for working on the smaller wooden-hulled landing craft and PT-boats. The extra ice cream was handy not only for the ships crew, but also abundantly reward the troops being ferried to the next beach head. And of course, as cumshaw to acquire the occasional difficult to find supplies and spare parts. 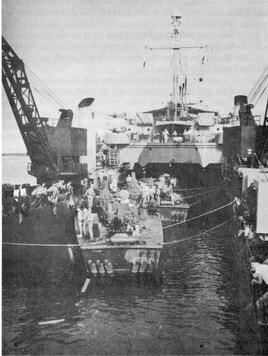 PT Boats of Squadron (MTB-37) being eased into their cradles in the flooded well deck of Oak Hill at Espiritu Santo, 24 July 1945, for shipment to Okinawa.
On 12 August OAK HILL with tanks and soldiers of the 710th Tank Battalion embarked headed west again. Following rehearsals for the Palau operation at Guadalcanal she was off Babelthaup by 15 September. There she proceeded to Anguar and sent her tank laden LCTs in and then again repaired landing craft. Departing the Palaus on the 21st she moved to Ulithi thence proceeded to New Guinea arriving at Humboldt Bay on the 29th to prepare for the invasion of the Philippines. The ships officers also used the production of ice cream to trade with the natives for fresh food and souvenirs.
​
​On 20 October OAK HILL stood off Leyte and launched LTMs and LVTs carrying 1st Cavalry Division units toward White beach. She was present for the Battle of Leyte Gulf, the largest naval battle of WW2. Then for the next two months she carried reinforcements from New Guinea to Leyte and then on Christmas Day arrived at Morotai to prepare for the Lingayen Gulf offensive. Departing the 28th she proceeded to Sansapor thence on 1 January 1945 to the Philippines. On the 9th she dispatched LCTs and LCVPs to the Luzon beachhead then withdrew to Leyte to begin ferrying reinforcements from there and from Morotai to the assault area. Another interesting advantage of this unique ship's abilities is when after deballasting, nice big fish were left flopping around the docking well. There was lots of fresh fish for supper as a result. 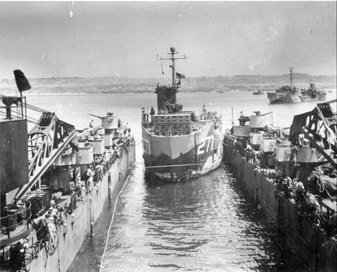 LSM-277 enters the well deck of Oak Hill at Hagushi, Okinawa, in May 1945
.Sailing to the Solomons on 2 February OAK HILL rehearsed with units of the 1st Marine Division for her next operation the Okinawa campaign. On 1 April she arrived in transport area Baker lowered her LCMs for the assault on Blue Beach and then began repairing landing craft. Through the end of May she remained in the Hagushi area for repair duties. Then she transported Marines and tanks to Iheya Shima and to Aguni Shima before steaming back to Leyte 10 June.

​On the way back to Leyte the OAK HILL was attacked by a Kaiten suicide submarine which was a modification of the long lance torpedo. She managed to outmaneuver then excape from the sub.

For the remainder of the war OAK HILL transported men and equipment from the central Pacific to the Philippines and Okinawa. In February 1946 she got underway for the United States and on 17 March 1947 she decommissioned and was berthed at San Diego as a unit of the Pacific Reserve Fleet. She was recommissioned in 1951 for service in the Korean war followed by service in the Viet Nam war. She was again decommissioned in 1969.
She was scrapped in 1970 at Marine Power and Equipment Seattle WA.
​My father could see her being dismantled from his apartment window from the hill above the shipyard.